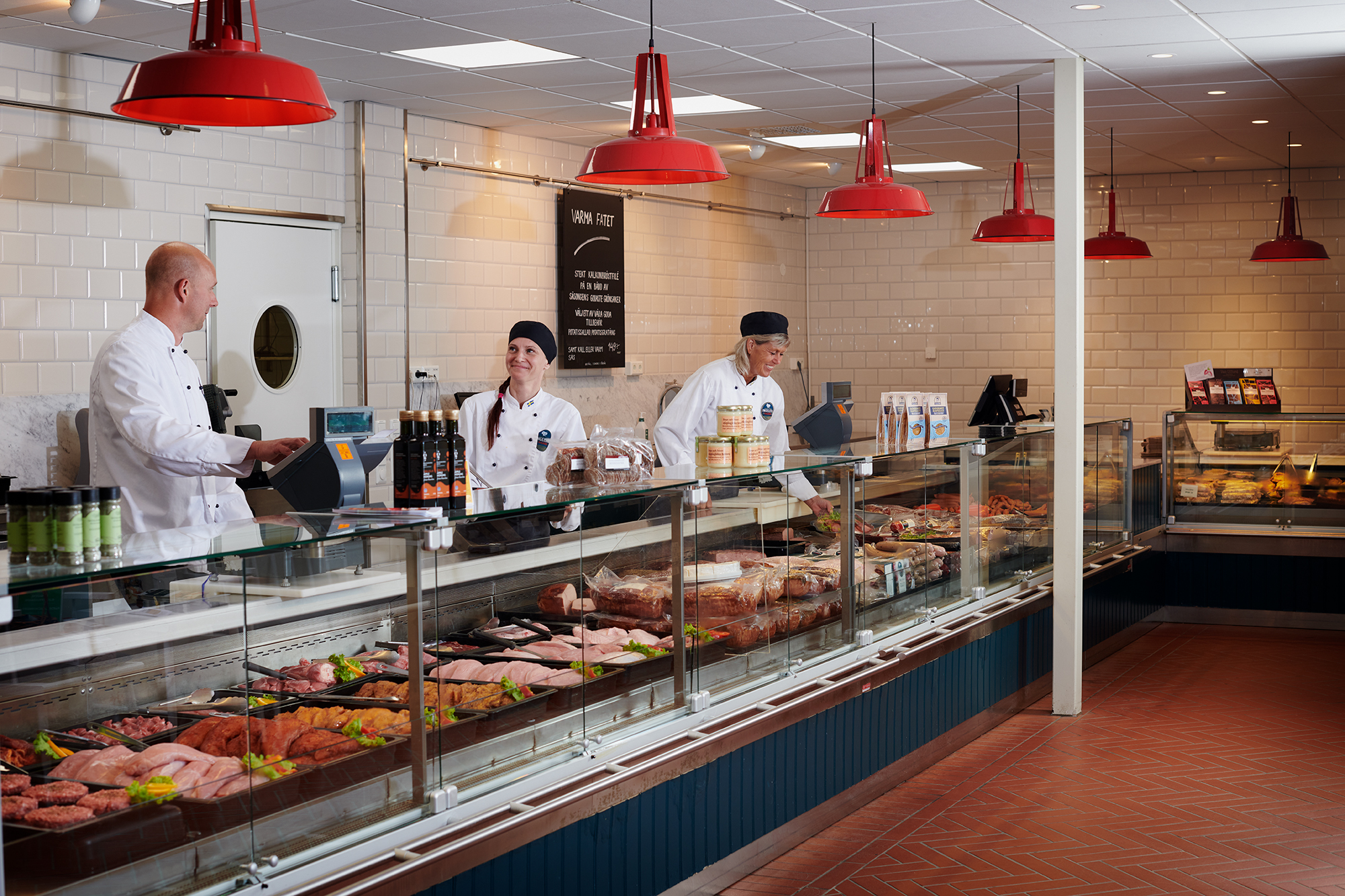 It all started when Leif and Lena Jönsson bought the farm Brukstorp in 1972 and wondered what they could develop on the site. The couple lived in the old brick house that is located in the middle of today's large facility with stables, restaurant, shop and production. 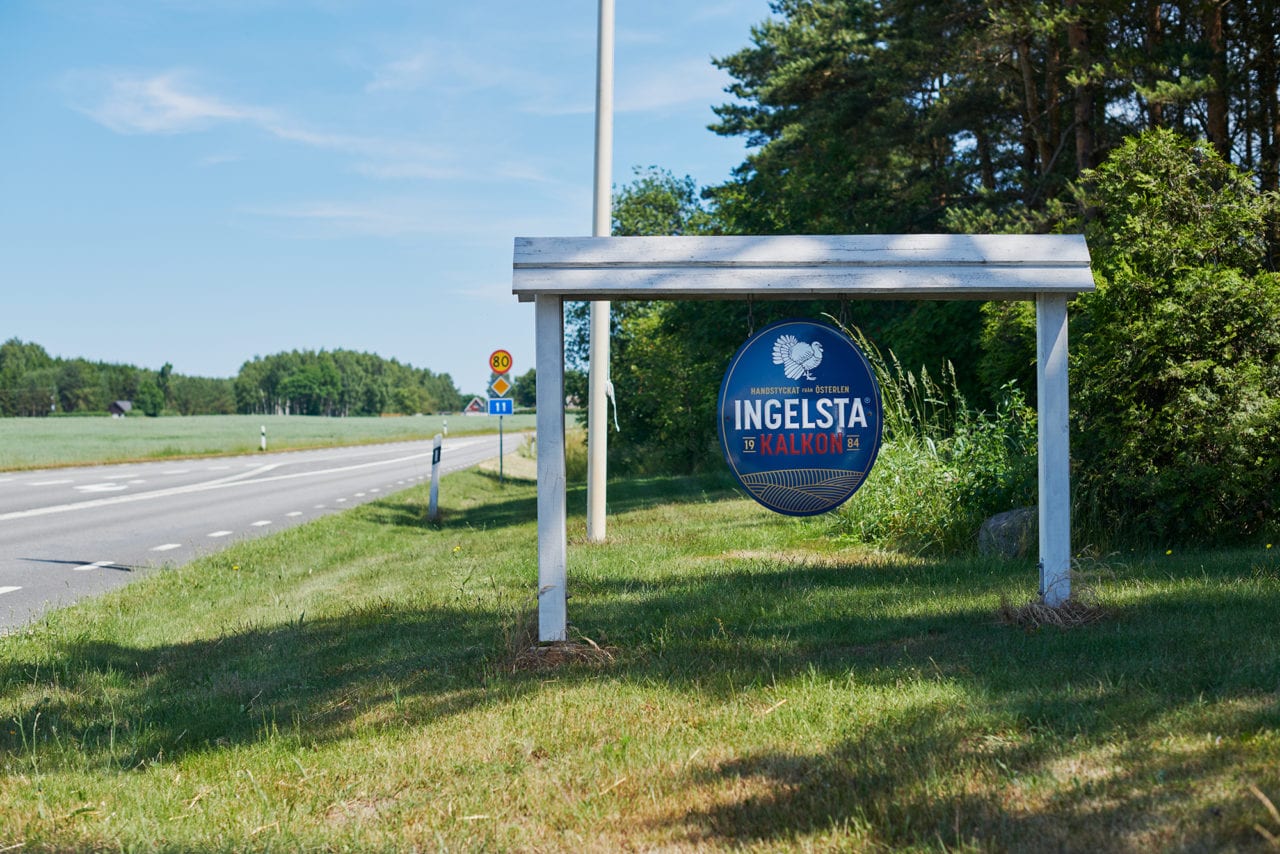 - Leif was and is a smart man who thought about what he would do in life - he concluded that turkey was not so many people devoted themselves to. Lena was very interested in cooking so she burned for that bit. He and Lena went over to the US and were inspired, they researched the entire chain from eggs and hatching to products, says Johanna Nilsson, marketing coordinator at Ingelsta Turkey.

When they got home, the couple Jönsson invested in turkey breeding, began to produce products on a small scale and sold from a freezer in the yard. Eventually, rumors spread and demand became so great that they started a small farm shop in 1984.

- In the summers many Stockholmers live in Österlen, and they started to laugh at Leif: "We must be able to buy this good in the winter too". This led to the opening of a store at Östermalm in Stockholm in 1989. It was later expanded with stores in Malmö, Lund, Stockholm and Gothenburg. In Gothenburg we are in the Great Market Hall, in the other cities we have our own stores.

In 1992, Ingelsta Turkey began to be launched in the grocery store and in 1993 the restaurant was built on the farm - which was initially a cafe. Today, there is a pavilion section that can be used for conferences and other gatherings, two playgrounds for smaller and larger children, and a display fence with turkeys.

- Since the products were only sold in the store in Österlen, there were crazy long waiting times. The café meant that customers had something to do during the time, and so it has evolved into the restaurant it is today - with today's lunch and à la carte, continues Johanna Nilsson who herself started working in the café in 2001.

Eventually, the business became so large that the Jönsson couple in the 90s decided to sell it further. Today it is family owned by Jan Håkansson with daughters Jessica and Petra.

- The company is part of the Blentagruppen, where the Goldfowl is also present. We are the fewest in the group, but we have a lot of power behind us - and very committed owners.

A lot has happened in the premises of Ingelsta Turkey over the last eighteen months. The restaurant has been rebuilt and made more welcoming, with sound attenuation in the roof and screened booths. The pavilion has also been redecorated, and the garden has been refreshed.

- We have a very nice delicatessen, but the restaurant felt old-fashioned, not as if it matched us. If you look at it now it is a different feeling, you get to hang out here for a while, let the kids play on the playground and have a cup of coffee. In addition, we are going to tell Ingelsta Turkey's story in a timeline on the walls, and perhaps include even more facts about the turkey itself as animals, says Anders Hedin, sales manager.

Initially, the turkeys were born within the company, today there are instead eight contracted farmers, one of them on the spot. About 1.000 turkeys are slaughtered per day, the chickens at ten weeks and the chickens at 18 weeks.

It is not allowed to go into the stables and look, partly because of infection protection - the company is a member of the trade organization Svenska Fågel. On the other hand, there is a small display fence right next to the restaurant, here visitors can also learn different facts about the turkey, such as that the chicken is eating 18 days on the egg.

- Today, about 100 people work locally at Ingelsta Kalkon. Even though we are a big business, we are still quite small-scale when compared to the competitors, it is a lot about laying hands. All the turkeys are handpicked, we have 18 big strong guys standing and cutting each turkey by hand - it's a little unique, says Johanna Nilsson.

- The most fun thing about working here is the development, it is small-scale, it is quick to get things through - from product development to events. And these are good colleagues, many have been with since the 1980s and can do much more than I do, she continues. 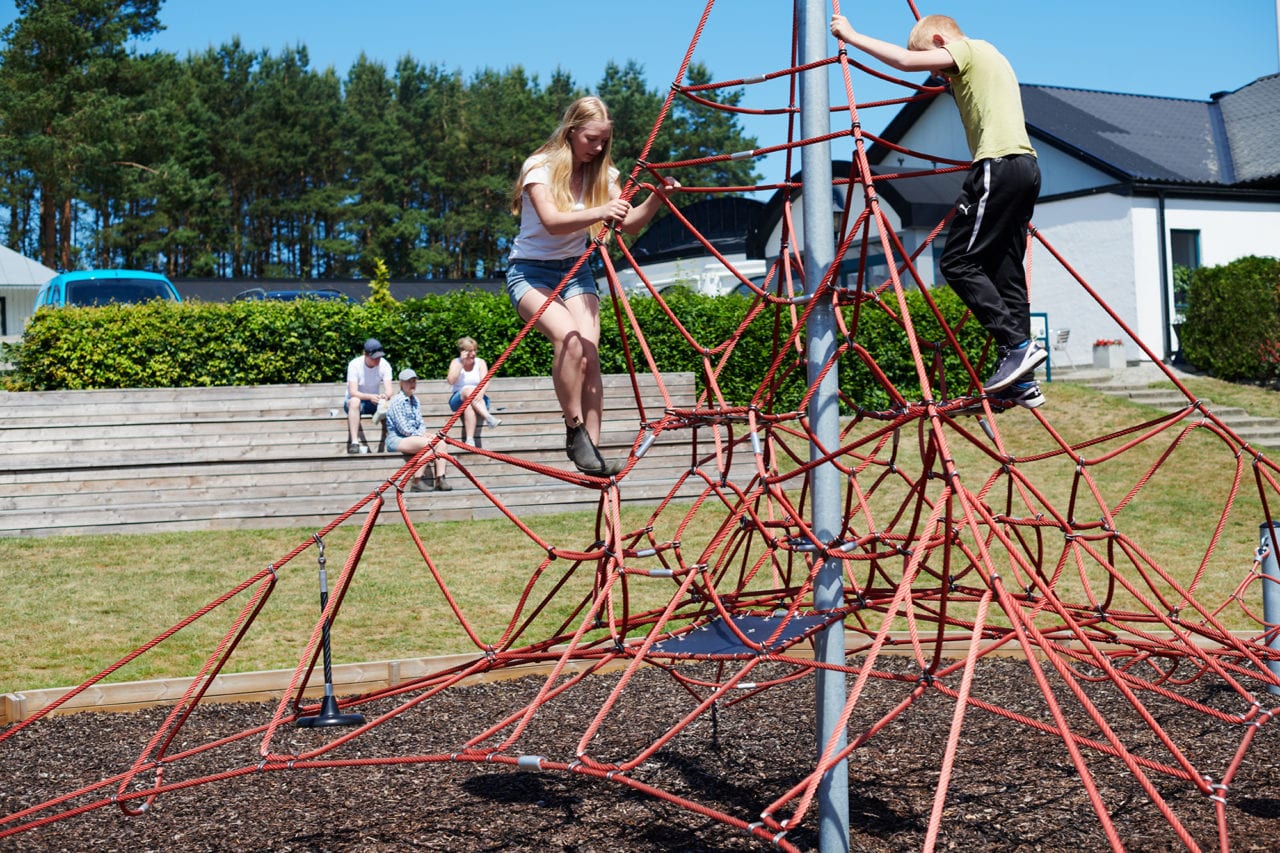 - Turkey turkey is a bestseller and can be used as usual for tacos, meat sauce etc. In addition, there are ready meals such as lasagna, steaks, turkey burgers and the like - convenient to bring and fix with you in the summer cottage and camper van.

- Wilmaschnitzeln is another big seller, it is a special product that is only available in our own stores. It is made on the turkey thigh and the meat is run through a special machine to lubricate it. Wilma schnitzeln is natural and marinated, it is magical to grill! We named it Wilma after Fred Flintas wife, as a link to the classic meat bite Flintastek.

Johanna Nilsson eats so much turkey herself that her colleagues bully her, and her son nobles all meat except turkey. Her dad started working here in 1988, that's how she got her foot in, and it's clear that she loves turkey.

- The turkey is the only animal where you can do a black and white, the chest is very light and the thigh dark. There is also a big difference in the meat, the chicken is soft while the turkey is more meaty.

It is easy to forget the turkey when you are at home and choose between meat, fish, chicken or vegetarian, but turkey meat has certain health benefits.

- It is protein-rich food and it means that you do not need to eat so much to be comfortably measured. The turkey meat is low in fat and has a fat composition that is good for us. In addition, it contains 20 of the 22 nutrients recommended by the National Food Agency - all but vitamin C and carbohydrates.

Ingelsta Turkey is unique when it comes to turkey in Sweden, there are really no competitors. Something that has been important from the beginning is to take care of as many parts of the animal as possible.

- That's how many of our products have come to us. Everyone wants to buy fillets, then we make meatballs from the clubs. The springs are composted and go back to one of our contracted farmers who spread it on their fields. The bones go to recovery while the hull is ground down to become animal food.

- We also have our own treatment plant where the purified water from the production irrigates an energy forest. And solar cells are on the wish list. Organic production, on the other hand, would not pay off - it requires animals to go outside, turkey is so small in Sweden and unfortunately it would not go around. 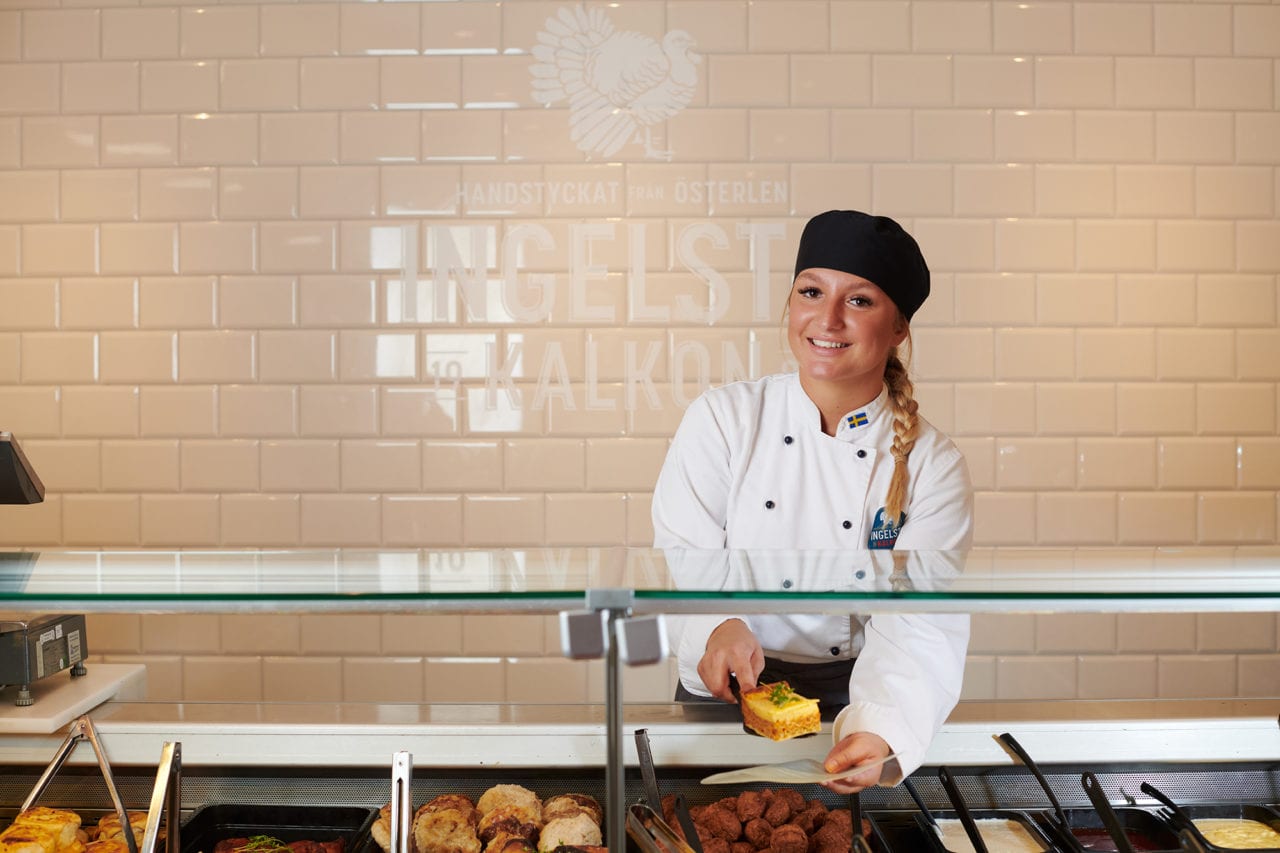 The craving for turkey at customers varies throughout the year, and also geographically. In Skåne, for example, roasted turkey is very large in early November, as an alternative to goose. In the rest of Sweden it is bigger around Christmas, and in Stockholm at Thanksgiving.

- If you do not want to cook the turkey yourself then there is catering. I usually say that we have everything for the Christmas table except the herring, and you are perfectly satisfied. Otherwise, my tips are: half an hour per kilo in the oven, and don't forget the thermometer, turkey meat is not boring and dry.

Around the shop are stands with recipes to take home, and the staff has broad knowledge and is happy to share their tips.

- The first step is to taste turkey, if you have done it then you are firm! Fish or chicken when you want to eat lighter meat - turkey is the third option, concludes Johanna Nilsson. 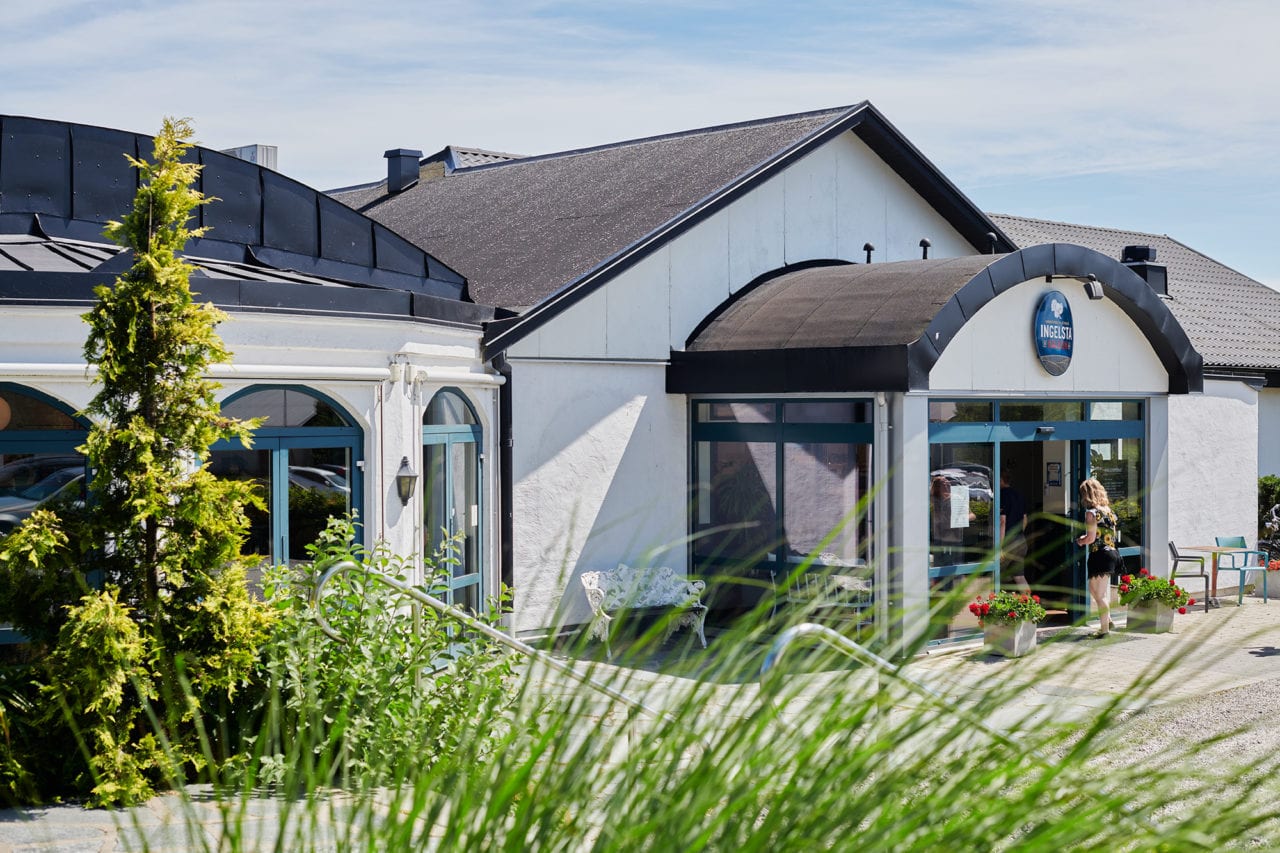 Employees at Österlen: about 100

Farm shop and restaurant outside Smedstorp. There is also an Ingelsta Turkey store in Gothenburg. Turkey products are sold in the grocery trade all over Sweden.

Good to know: The facility is adapted for the disabled. There is plenty of room if you come with a caravan or camper van. The restaurant is richly equipped with highchairs.