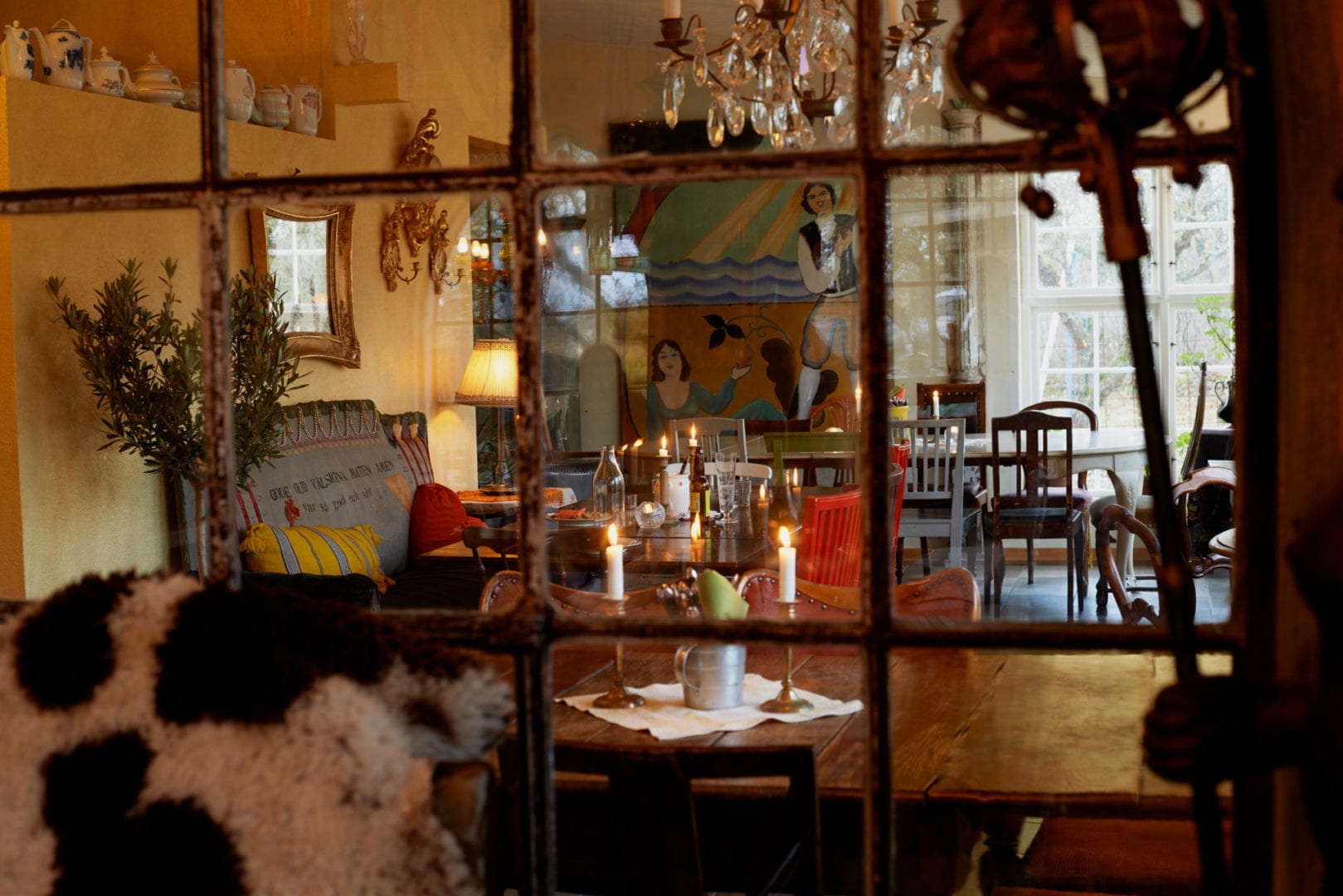 In the middle of nowhere among messy apple trees lies Friden. Here, a woman from Hälsingland and a man from Stockholm have created an odd tavern that bakes Österlen's perhaps best pizza. 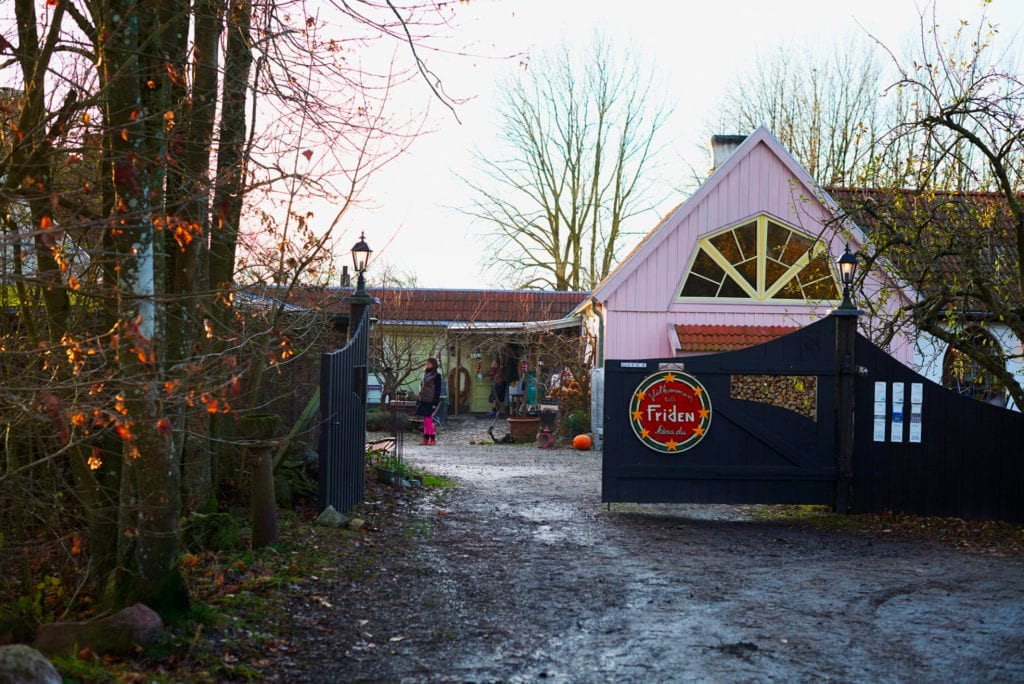 Just when you think you probably drove wrong and the road ends, lies a small three-lane skåne farm from the 1800th century. We have found Friden farmhouse, just outside Mellby, a few kilometers from Kivik and it smokes from the chimney in the old stable.

- It is usually calm no matter what this year, sighs Barbro Runwall Olsson who together with her husband Peter owns and runs Friden farm restaurant, a few kilometers from Kivik. But even though it's only just after 12, it's already full of people. The glow is perfect in the oven where the day's first pizzas are baked, a Hultgren and an Endre. Peace pizzas are named after regulars who in one way or another have deserved this. 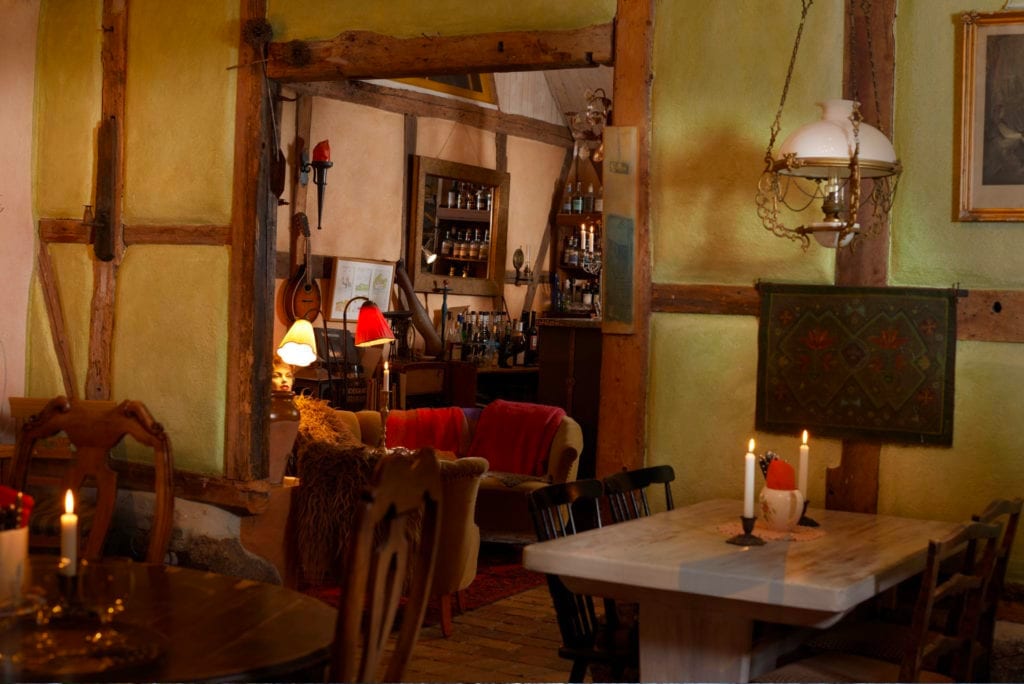 - The first pizzas are like the first pancakes, hard to get really good. The edges do not want to be dark enough, says Peter as he bakes dough on dough with strong hands. To decorate pre-baked bases with hand-peeled prawns, fresh coriander, freshly caught mussels, eggplant, pesto, tomatoes, mushrooms, wild duck mince and more in the next minute. As much as possible organic and locally produced.

Barbro takes orders and serves homemade apple juice from large bottles. From the speakers, Tony Bennett sings a duet with Frank Sinatra and everything goes on as if in a kind of loving and used dance in this odd place full of details to rest your eyes on. The leaded windows in the built-in part for the thoughts of a church. Peace is Barbro and Peter's unique creation where everything is on their terms. Guests are allowed to take it as it is.

How come a marketing researcher from Hälsingland and a real Söderkis from Stockholm cook pizzas in Österlen?

"Oh, I have told this story many times," says Barbro, laughing, but after a little persuasion comes the story of life's sometimes marvelous and circular paths. What would become a report on the art of pizza making begins with love instead.

Barbro and Peter met for the first time when they were 18 and when both worked at Långbro mental hospital. Apparently arose, Peter made Barbro laugh, but they were not a couple because both were already busy.

- A few years later I worked as a pizza baker in a southern suburb and I will never forget that winter day when the door suddenly blew open and a woman in fur stepped in. After a few seconds, I saw that the woman was Barbro, Peter says as he places trout creams on clicks of avocado cream.

Love arose, but it was as if the time was not yet fully ripe and for different reasons they parted again. Barbro moved to Gothenburg, then ended up in Österlen where she started working with marketing at wine and must producer Åkesson.

- After many years I got tired, felt burned out and started to long for something completely different. I dreamed of buying an old apple orchard that still had the old varieties of apples, says Barbro and cursing the years when the apple growers received EU grants to pull up all the old varieties and replace them with new much more tasteless varieties.

Barbro talked about his thoughts to an acquaintance who immediately hinted at the old farm at the end of the road. They went there, but turned to the courtyard. Everything was so dilapidated and overgrown that you could hardly see the houses.

But houses that want to be bought do not let go and when the yard reappeared with a broker, Barbro could not help going there again. 1999 became her farm. After an endless mass of renovation work, she began making her own spirits of apples, a kind of "pommeau".

It was when Barbro was on her way home from Hälsingland that she unexpectedly began to think of Peter, wondering how he was doing, what had happened in his life. Then it had been 13 years since they last saw each other. As she passed Stockholm she made a detour to Fruängen and judge of her surprise when she suddenly saw Peter standing there at a bus stop. 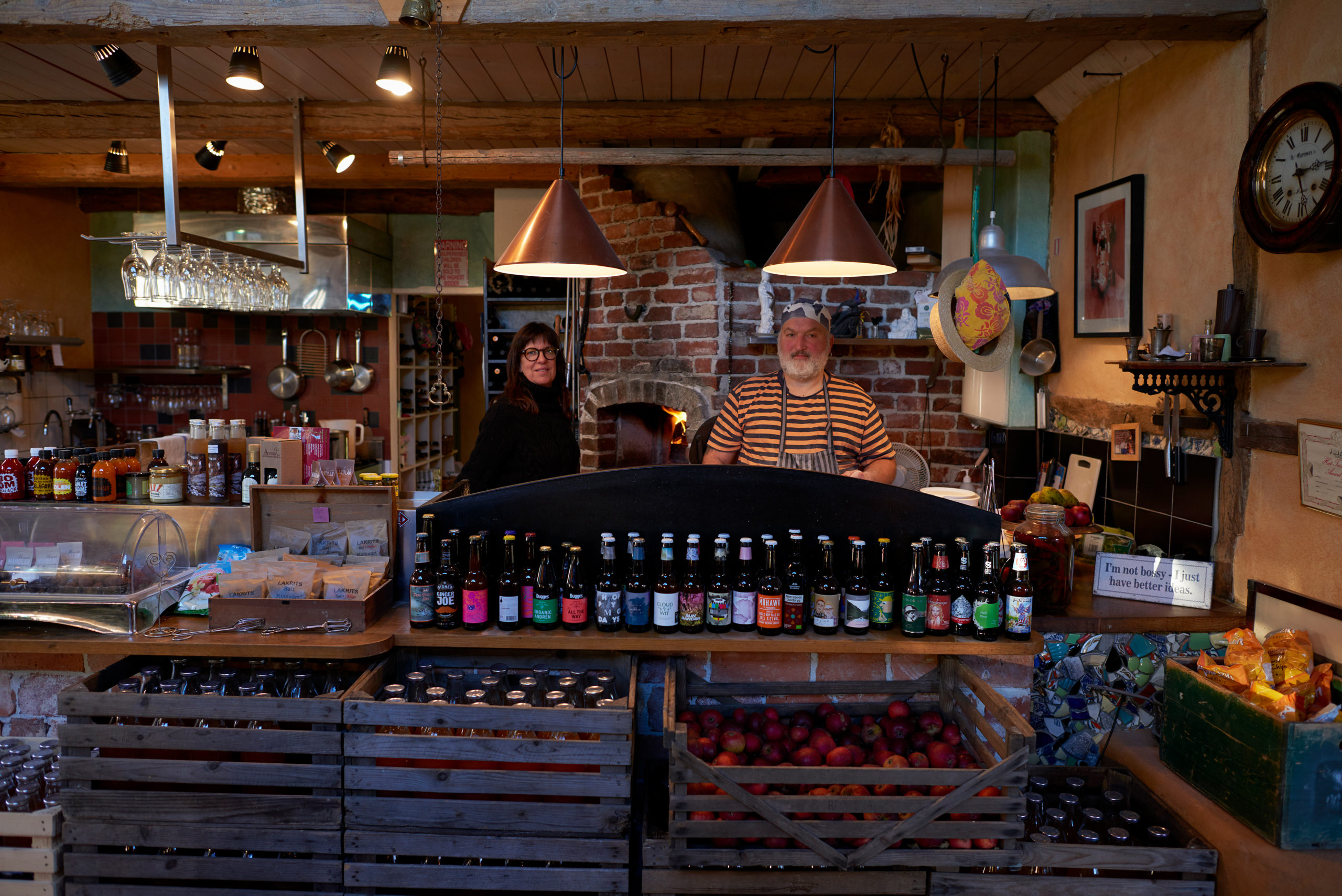 - I didn't believe my eyes, parked the car, walked up and said: Hey, it's me, Barbro, do you recognize me?

He did, but after a short conversation the bus came, he jumped on which he regretted deeply after only a few meters. Fortunately, at least Barbro had hatched that she lived in Kivik and was still called Olsson. But she was the first to call. "It would be fun to see," she said after talking for over two hours. I have a little vacation to take out and can come down next week, ”he replied.

He went down and stayed. It is now 15 years ago and 12 years since they opened the Peace, named after the peace that Peter found in the old courtyard. That's the way it is. A journey full of joy, nice reviews in White Guide and magazines, but also a never-ending stream of work. In the summer, they work almost XNUMX hours a day even though they have several employees. Many times they have been on their way to give up when the Scanian brook darkness settles around the apple groves about the winters.

- I'm so proud that we still hold on. It's great to get to know all these people, our tribesmen. Those who were children when we opened now come with their own toddlers, says Barbro and shows up two great vegetarians. One Eriksson and one Forslöf. 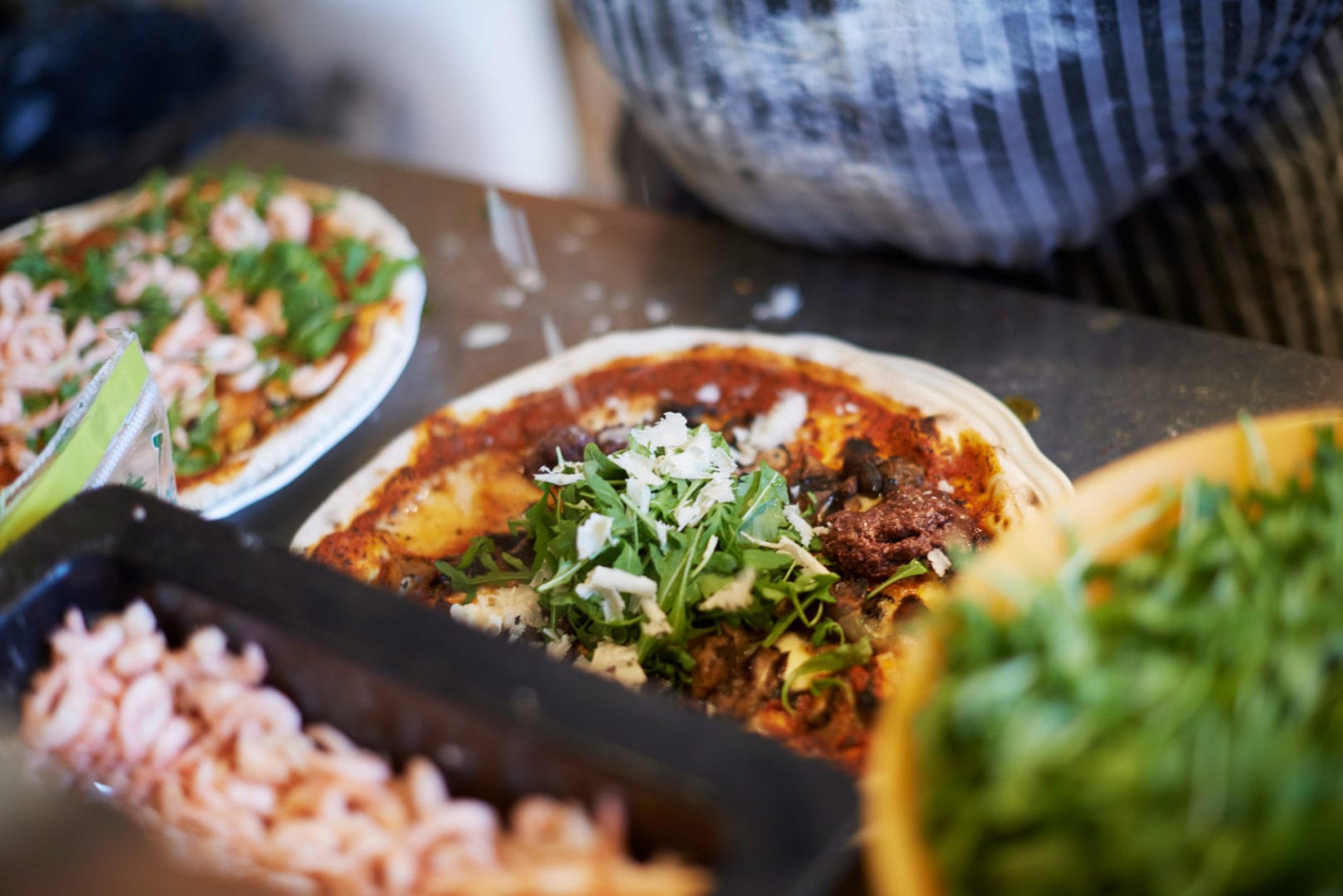 After a chew, it is understood that it is not only the cozy garden where everyone sits and eats in the summer, the tokitschy style, the chickens, the geese and the dream of life in the countryside that attracts. The edges of the pizzas are crispy, perfectly cooked, the bottom floret thin and just as crispy. The flavors of grilled eggplant, whole tomatoes, pesto and the chewy, melting mozzarella are seductive. Peter knows his profession and found the love of pizza when he was already on holiday with his grandmother and grandfather in Riva del Sole in Italy.

- It is important to have good raw materials. I bake with sourdough and only with organic wheat from Saltå mill and dinkel from Skåne Tranås. And no junk cheats like sugar in the dough to get the right color. Then you have to have a good tomato sauce and a really good mozzarella, says Peter.

For dessert, saffron pears with whipped cream are offered. And chocolate mousse cake with walnuts. Strong coffee and maybe a glass of Barbro's pommeau for those who don't drive.

It is said that children enjoy where love is. The same goes for pub visitors. The love between Barbro and Peter, even though they say they are very different and sometimes quarrels like a thousand, is clearly visible on the little corner beyond the all-roads. It sits in the walls and is well baked into the pizzas.

Here you come to the website of peace with opening hours and more information.

In winter there are no good fresh tomatoes so take a can of whole or passed tomatoes of good quality. These tomatoes have been picked when ripe and have a more concentrated flavor. 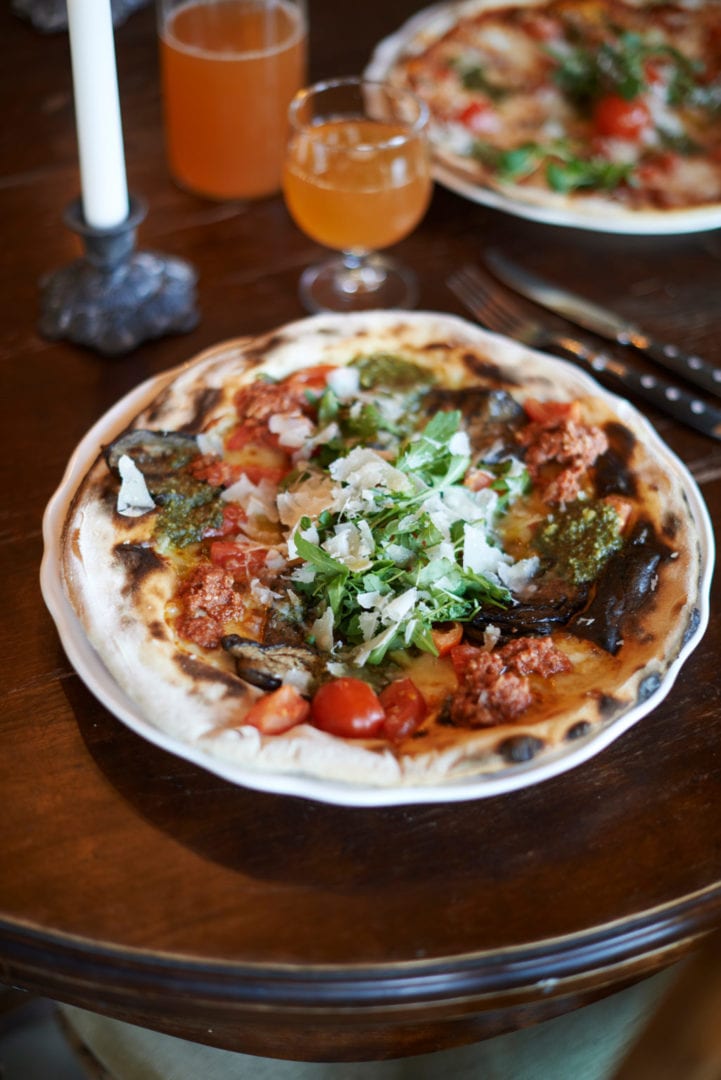 Continue with the pizza: 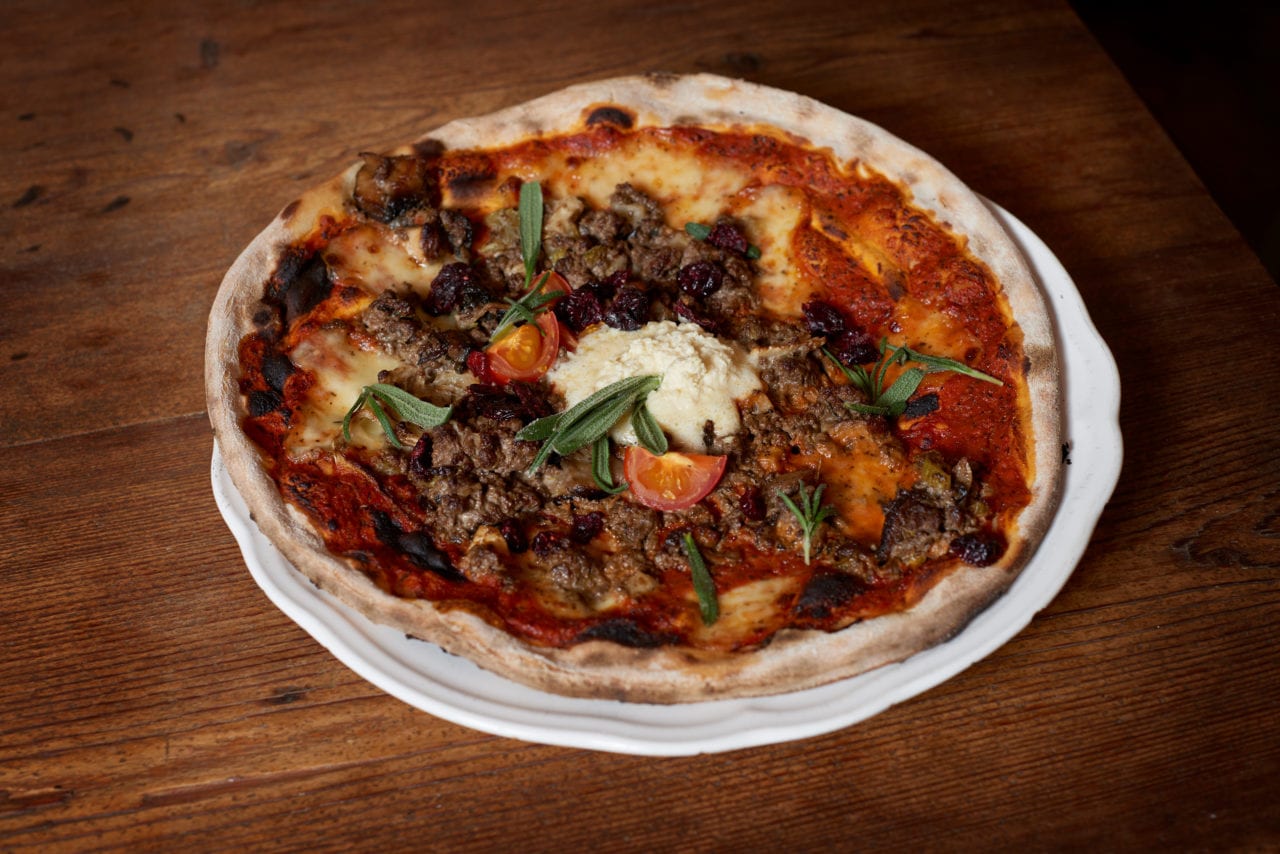 Take out and click on the fennel cream and decorate with a few twigs of rosemary. 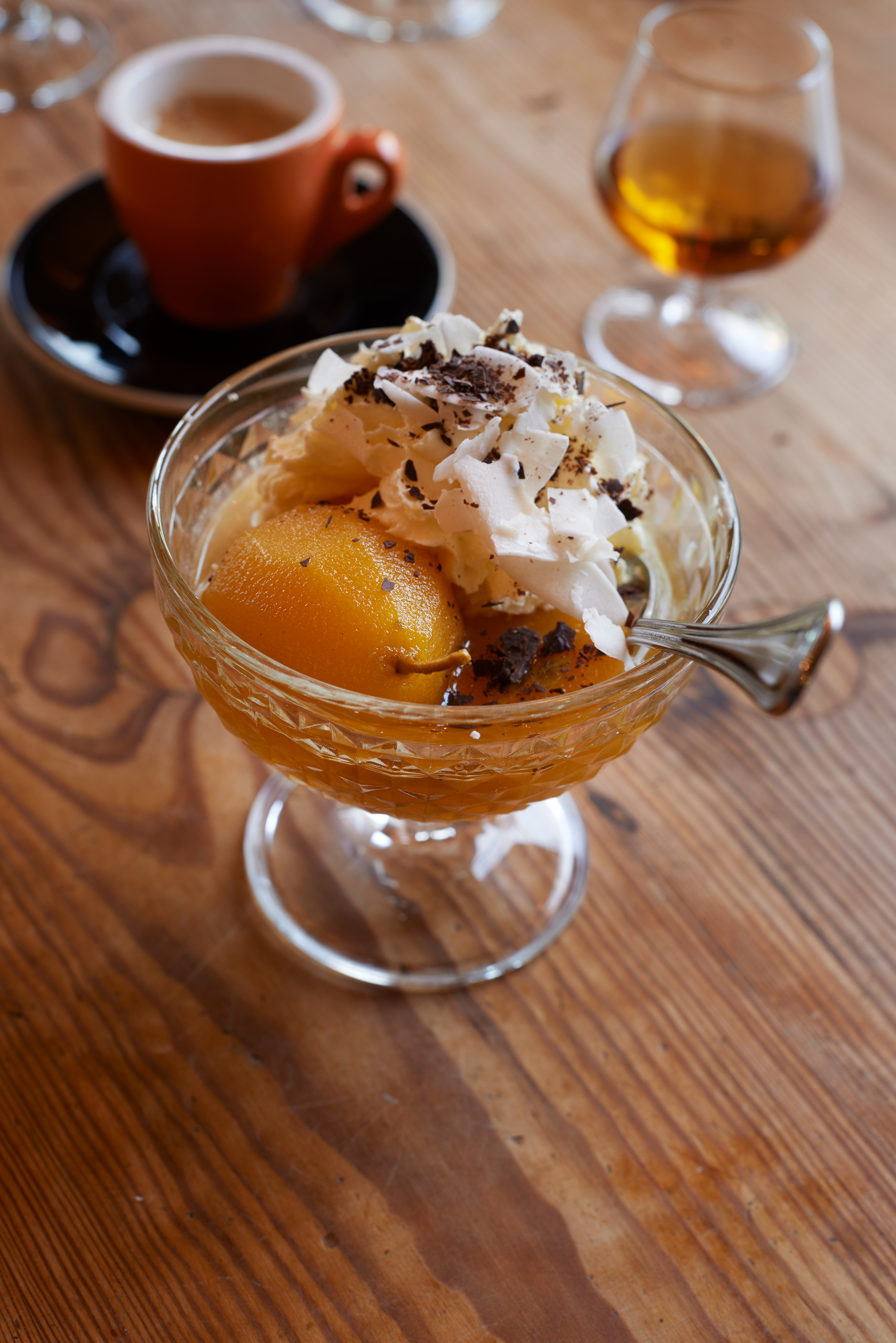