AS FAR AS I CAN REACH
EXHIBITION & BOOK RELEASE

In our large hangar we show an exhibition with the painter Johan Widén & the author Ylva Gislén.
Johan shows a new series of large-scale paintings for the first time that he has worked with in the last ten years.
In connection with the exhibition, a book After Jerusalem is also released based on a long-standing collaboration between Ylva & Johan. 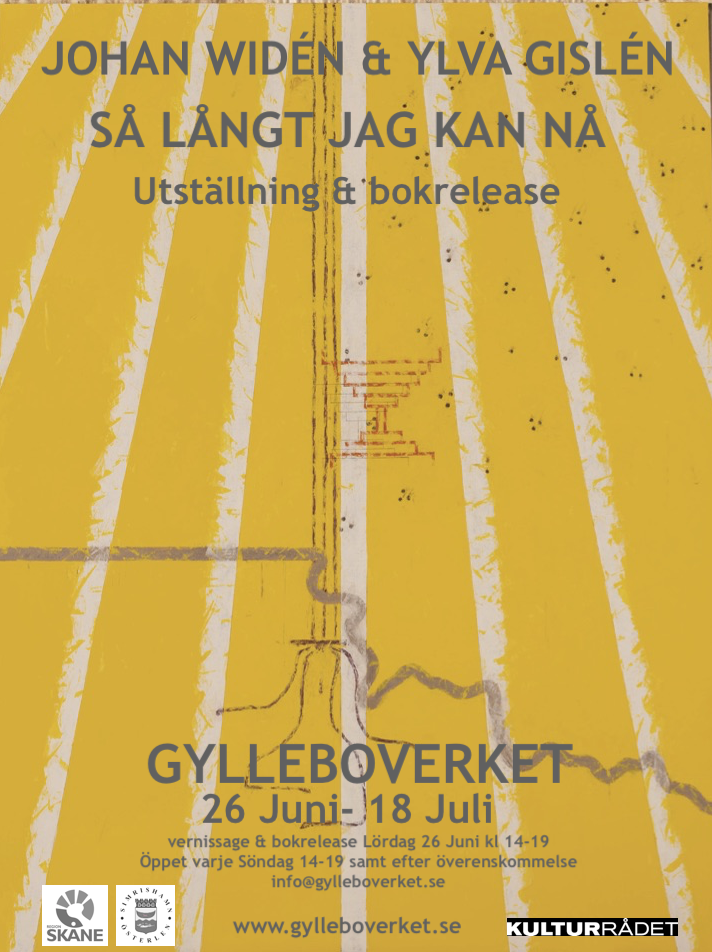 More info about the exhibition "As far as I can reach"
As far as I can reach are six larger paintings, divided into three pairs, which I have been working on for over ten years. The original idea is a way of thinking, a kind of phenomenological study, where I seek the outer limits of where I am, in an existential and cultural sense, I feel "at home". Landscape and light, time and space, the past and the present, language, sound, scents and ways of moving in both a literal and a metaphorical sense. Specific places that for me are like outposts against what is "gone", which is something "different", something "foreign".
In As far as I can reach I and II, the places are the Etruscan town of Volterra in Tuscany and Resele in Ångermanland (where my grandfather grew up). In the second pair, III and IV, the outer borders are Nås in Dalarna and Kidrondalen / Wadi an Nar on the West Bank. In the last two, V and VI, one outpost is Deir ez-Zour in eastern Syria and the other Väggarp in Skåne. Deir ez-Zour is located on the Euphrates and a few miles south along the river lies Dura-Europos, which in ancient times was the Romans' last outpost to the east. But it was also in these areas that the last regular battles between the Kurdish-Arab forces and IS took place in March 2019. For more than three years I have lived in the small Scanian village Väggarp, surrounded by settlements that stretch all the way back to the time when the first hunter-gatherers wandered north after the ice sheet melted.
The dimensions of the paintings were determined by how far I can reach standing on my toes and stretch my arms upwards, and how far my arms reach when I extend them sideways: 253 x 193 cm.
More info about the book "After Jerusalem"
At the turn of the last century, Selma Lagerlöf and Sophie Elkan traveled in the Middle East. After the trip, Selma Lagerlöf wrote the novel Jerusalem (1901–1902): her great breakthrough as an international author.
The author Ylva Gislén and the artist Johan Widén have traveled in their and the novel's footsteps: from the slopes of the Dalälven to today's Jerusalem - and back again.
In several parallel series of lyrical texts and paintings, they move here around the mythical, political and artistic issues the relationship between the novel's past and reality's now evokes.
The book also contains essays by the author and cultural journalist Ingrid Elam and the artist Sophie Tottie.
+ Google Calendar+ iCal export