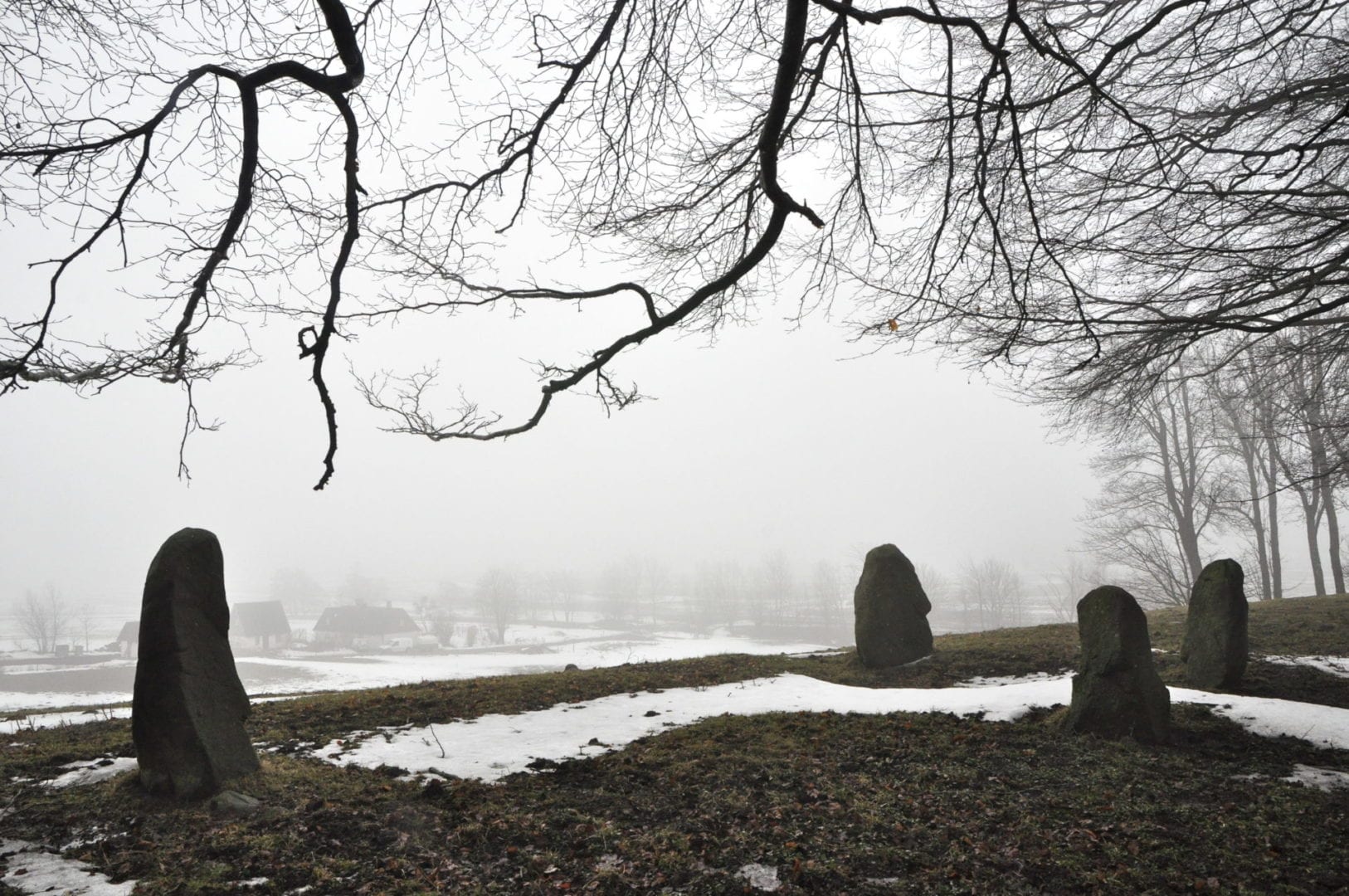 Has anyone seen the Scottish TV series "Outlander"? It is about a woman who travels back in time after a ceremony at a tomb in Scotland and is thrown right into the battles against England in the 1700th century. 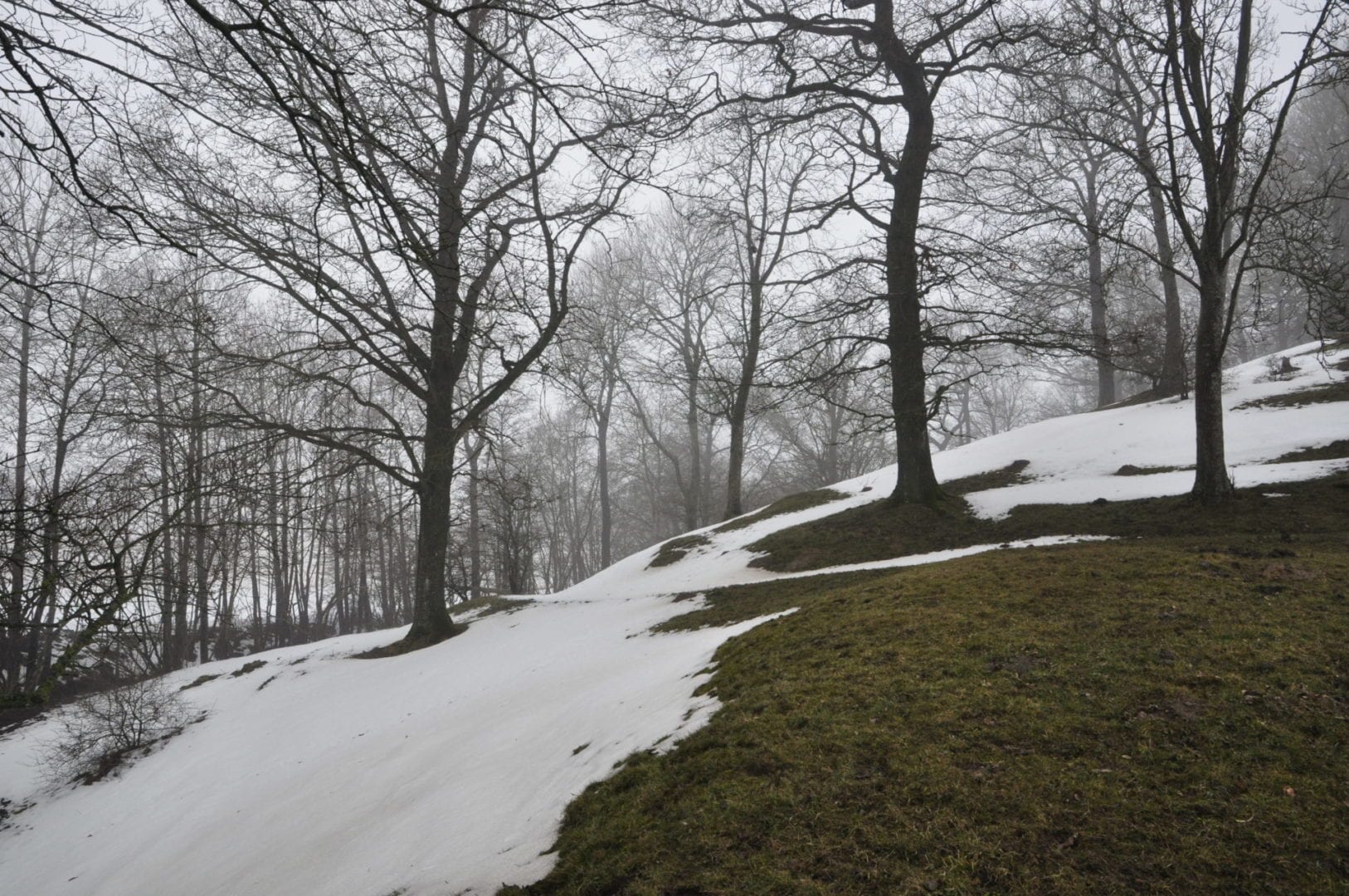 Every time I drive past Smedstorp and see the majestic stones at the top of the Alnabjär hill, I now mumble "Graig Na Dun" to myself, the name of the fictitious burial ground.
The stones stand high on the back of Gårdlösaås in a landscape similar to the TV series. They are shaded by large deciduous trees and share their location with grazing cows. From the height you look out over a soft agricultural landscape with the winding Tommarpsån in the fund.

According to local legends, the shipwreck was erected after the warrior King Alne, who also gave his name to the hill Alnabjär, Alne's mountain. In the southern slope of the mountain, there must have been four stones that marked Alne's wife, Queen Gya's grave. The slope is called Gyas hill by the locals.

Once a few boys decided in the village to dig at Alnabjär - of course there must be precious things in the grave after a king. The artist Frans Lindberg, born in the area in 1857, recounted the event for a public life researcher in 1940:
“The digging would be silent, no one had to utter a word or give any sound. Since the excavation continued for a while, they were disturbed by visions, but continued the excavation for a while. Then an unusually large black hen finally appeared. Then the courage of the karish boys disappeared, and throat over their heads, for they knew that the black hen was the most dangerous of all ghostly visions. "

At a house building in the village, stones were taken from the burial ground, the morning after that, according to the story, they did not remain but stood in the same place as before. After that, the stones were considered taboo and left untouched - until the event fell into oblivion and stones again began to be used for the construction of various kinds.

When the gravel was picked up on the ridge in the 1920s, a coffin of limestone pebbles was salvaged in 1928. Archaeologists came here from Lund University to find human bones, fragments of a knife of iron and shards of a clay pot whose decor placed it in the Roman Iron Age.

With continued mining in the 1940s, more finds were made in the family. In 1949, a more thorough archaeological excavation was carried out when, among other things, two tombs from the Roman Iron Age were found. In the mid-1960s, a large survey of Gårdlösaåsen began, which was to last for fourteen summers. Findings in 1972 showed that people had lived on the ridge for almost the entire Iron Age. 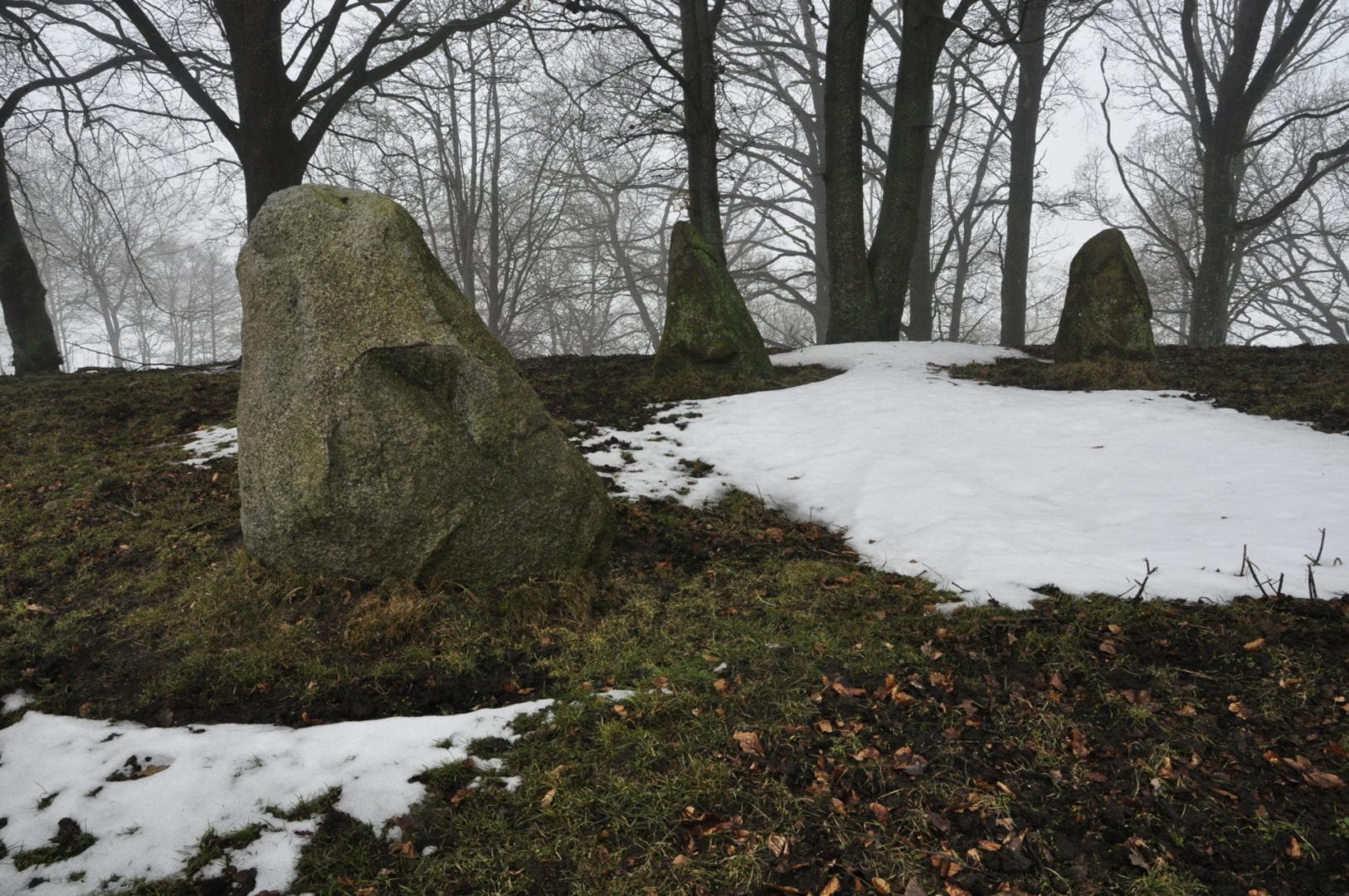 The archaeologists found tombs, stone carvings and the remains of a shipwreck from 550–800 AD. Today, only four remains of the latter remain on Alnabjär. Outside the ship there is a group of smaller, round and oval stone carvings from the Iron Age.

About a kilometer further north on the Gårdlösaleden trail you arrive at two ship settlements consisting of fifteen and sixteen stones, respectively. A short distance away there is a judging ring with ten stones. The site was excavated within the so-called Gårdlösa project, which began in 1963. In the investigations, graves were found both inside and outside the rings.

In a grove on the other side a field a few hundred meters north of the shipwrecks, in 1949, the remains of a woman were found in a tomb covered by two large limestone rocks. However, since the land around the landfill site is cultivated, you cannot enter it without the landowner's permission.

With her in the grave, the woman had various grave gifts, including decorated clay vessels, costume needles - fibrils - of bronze and silver, a bronze needle, glass beads, a leg comb and a storage box for needles - a needle house. The archaeologists also managed to save fabric and thread fragments from the woman's costume. 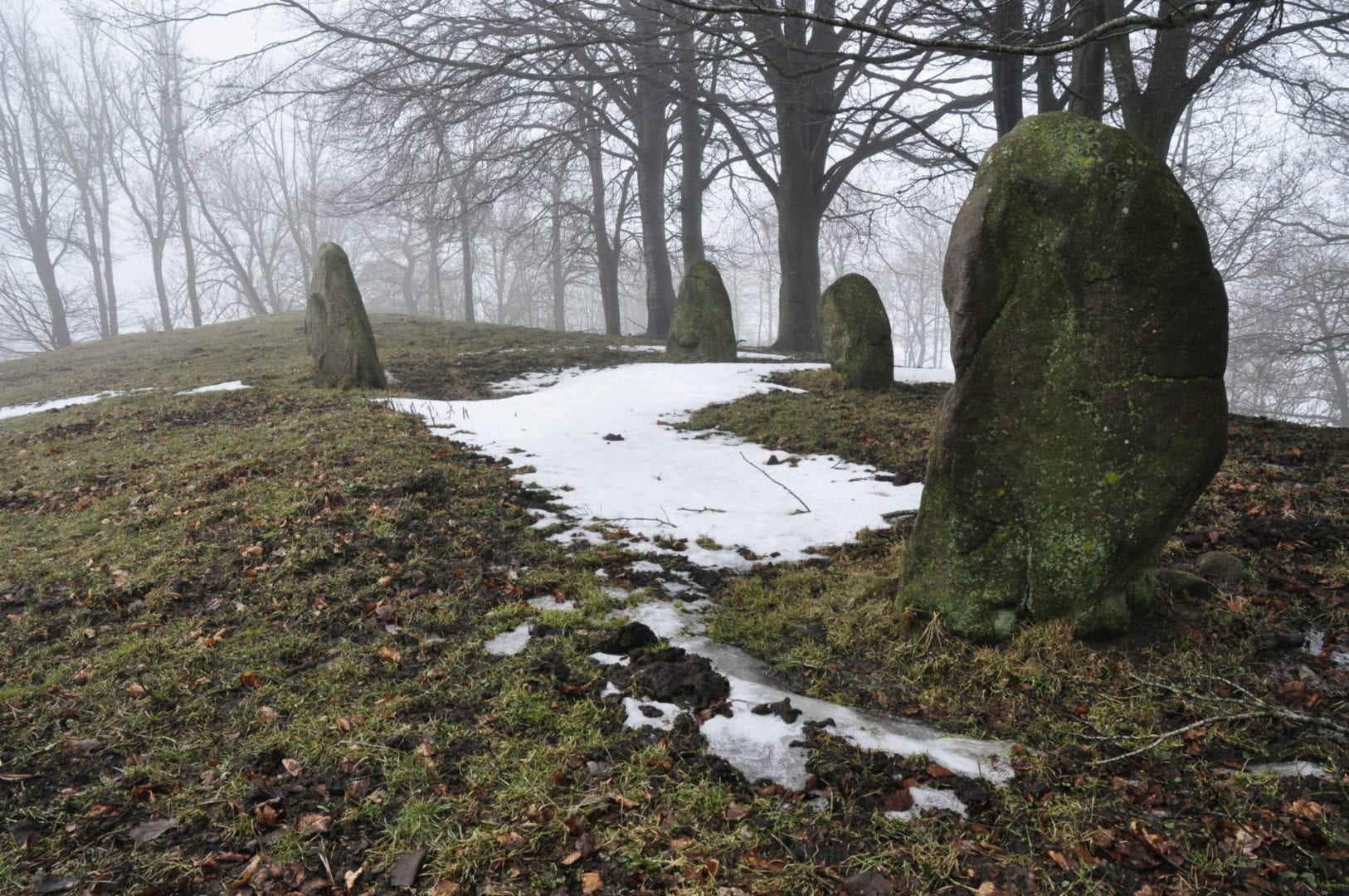 On a silver fibula placed on her chest it says in run inscription "ekunwodr", which may mean "I unwodr", so maybe her name was just Unwodr. Unwodr, in turn, means "the peaceful, calm and non-angry". Since the fibula is from the 200th century, this runin inscription is one of the oldest in Sweden.

The woman was of high burden, it is visible on her expensive jewelry and the fact that her teeth and skeleton were in good condition. She probably lived a comfortable life with good food and care of slaves. In Skåne, she was given the name Silver Girl, but to be correct, she is rather a Silver woman. At the Historical Museum in Stockholm, she is called the woman from Gårdlösa and is part of the permanent exhibition "Forntider".

Alnabjär, the ship's sentences and the judging ring are located on Gårdlösaleden which starts and ends at the station in Smedstorp. The round is 12 kilometers long and goes through the Nature Reserve of Listarumsås and Ljungavangen. The hike is very beautiful and for you through deciduous forests and past meadows. Along the route there are several other interesting environments, including some quarries, a lime kiln, a peat canopy, a break cabin for linen handling and a frog reserve. You also pass the Tommarpsån, the home of the endangered, thick-skinned target mussel.

The text is taken from Caroline Alesmark's book "Troll forest and river dance - hike to enigmatic places" which came in 2019. 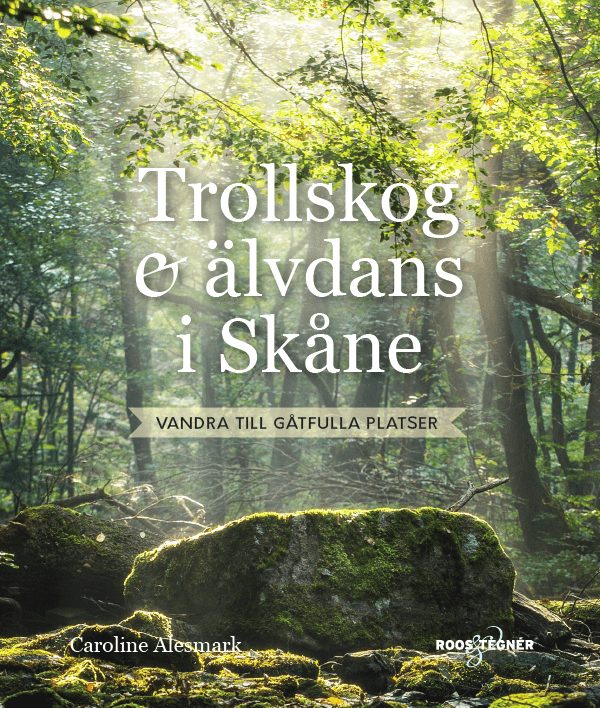